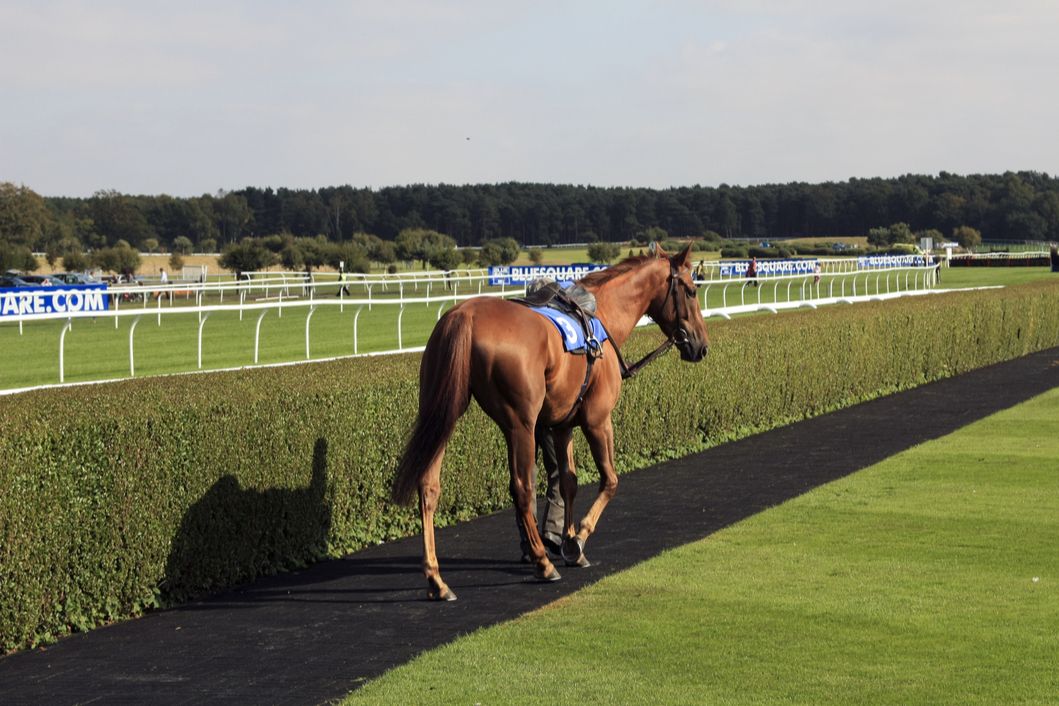 There are no tips for Market Rasen today.

Market Rasen is a right handed course of around a mile and a quarter. It is worth noting that it is quite a sharp track when considering your Market Rasen horse racing tips for today. This tends to favour speedy horses that can lie up with the pace rather than long striding animals. There are three fences in the home straight but horses can struggle to make up ground if not in contention at the third last.

Market Rasen is a National Hunt course located in Lincolnshire. Road users travelling on the M1 should exit at junction 24. Follow the A453 to Nottingham and the A52 to the A46 through Newark to Market Rasen. Those arriving via the M18 should exit at the M180 to Grimsby, Scunthorpe and Humberside Airport. Exit onto the A15 to Lincoln and follow signs to Market Rasen on the A631. Market Rasen Railway Station is just one mile from the racecourse with taxis readily available.

There are records of racing having taken place at various sites around Market Rasen between 1828 and 1924. Flat racing was originally staged here with National Hunt racing added in the mid-nineteenth century.

Feast Week was a regular Autumn festival from 1828 to 1887 with the National Hunt meeting added in the spring of 1871. The current site was first used in 1924 and immediately became popular with National Hunt enthusiasts due to its proximity to the Brocklesby, Southwold and Burton Hunts. The Market Rasen United Hunts Steeplechases Limited company was set up and 100 acres of land acquired for a permanent racing site.

Victor Lucas was responsible for the design, layout and running of the course from 1945 until 1971. Market Rasen played host to twelve meetings by 1967 including Easter Bank Holiday Monday and a Boxing Day fixture. Racecourse Holding Trust bought the course in 1967 and the track remains in the care of Jockey Club Racecourses.

Point-to-point racing used to be staged here on a track inside the National Hunt course but this was eventually closed.

There are currently 22 race days at Market Rasen, running right through from January to December. There is at least one race day scheduled for every month of the year.

The biggest meeting of the year at Market Rasen is the Summer Plate Ladies Day towards the end of July. There are always plenty of Market Rasen betting tips for the valuable Summer Hurdle and Summer Plate, two of the richest races of the summer jumping season. There are several popular Sunday meetings and a Saturday evening meeting in August.

The Summer Plate has been won five times by trainer Peter Bowen. He won the race in 2006 with Stately Home and again with Ballycassidy in 2003. Stately Home carried top weight of 12 stone, successfully conceding almost two stone to runner-up Weaver George. Bowen then enjoyed a hat-trick of victories with Yes Sir (2006), Iron Man (2007) and Snoopy Loopy (2008). The latter went on to win the £127,000 Grade 1 Betfair Chase at Haydock Park. He started a 33-1 outsider but took advantage of the departure of odds-on favourite Kauto Star at the last fence.

Martin Pipe won the Summer Hurdle on three occasions with Eden Dancer (1999), Puntal (2002) and Buena Vista (2005). Puntal would go on to make his mark over fences, winning the Betfred Gold Cup (formerly known as the Whitbread Gold Cup) in 2004. Buena Vista was very popular among Market Rasen racing tips, starting 2-1 favourite in a field of eighteen runners. He would ultimately become famous for his performances in the Pertemps Hurdle Final at the Cheltenham Festival.

David Pipe took over the training from his father in 2006 and Buena Vista had a brief spell over fences. He returned to hurdling in 2007 and finished fifth in the Pertemps Final in 2008. In 2009 he finished second to Kayf Aramis before winning the race for the first time in 2010. All roads led to Cheltenham in March the following year where he repeated his success. He ran in the race for a fifth successive year in 2012 but faded to finish down the field behind Cape Tribulation.

Bowen also rattled off a hat-trick of victories in the Prelude Handicap Chase between 2007 and 2009. Iron Man (2007) was followed Always Waining (2008) and Valley Ride (2009). Always Waining became a great favourite with Aintree racegoers, winning the Topham Chase for three successive seasons. He finished fourth on his first run in the race in 2009 before winning at odds of 22-1 the following year. Always Waining showed no worthwhile form before repeating his victory in 2010, this time returning at odds of 14-1.

Bowen had hoped to run him in the Grand National the following year but he did not make the final forty. Consolation awaited in the form of a record-breaking third Topham victory at odds of 11-1. He finally gained his chance in the National in 2013 but finished only tenth behind Aurora’s Encore.

There was a high class renewal of the Prelude Chase in 2017 when Ballybolley beat Guitar Pete and Master Dee. The runner-up won the £68,000 Caspian Caviar Gold Cup at Cheltenham in December. Master Dee went on to win the £57,000 Betdaq Handicap Chase at Kempton in February.

Dan Skelton must feature in the best horse racing tips for Market Rasen today. He is the leading trainer at Market Rasen by a considerable margin over the past three seasons. His runners have raked in more than twice as much prize money as any other stable during that period. He has returned an impressive 27% strike rate over fences and 31% over hurdles.

Graeme McPherson is a trainer to note in steeplechases here while Fergal O’Brien and Tom George also do well. Grand National winning trainer Dr Richard Newland also does extremely well, particularly with his hurdlers. The top yards of Paul Nicholls, Nicky Henderson and Philip Hobbs all return a high percentage of winners from relatively few runners.

The two leading jockeys in our Market Rasen tips are Harry Skelton and Aidan Coleman. They are the most successful riders over the past three years here. Both return a healthy percentage of winners over fences and hurdles. Jockeys James Banks and Jamie Hamilton do well with their limited opportunities in steeplechases.